What Our Choice of Pet Says About Us

Does our choice of pet reveal anything about our personality, beliefs or lifestyle? Several studies reveal our choice of pet says a lot about where we live, work, and what type of personality we have. Most of us probably believe our pets says a lot about who we are. We give so much love to our pets and many of us see them as an extension of ourselves. It is not surprising we choose companions that reflect some of our own personality traits. The available research reveals many interesting thing about us and the pets we love.

Well over 84,000,000 households in the United States include companion animals. For several decades, the notion that pet ownership was good for physical and mental health prevailed. However, the results of a 2009 study of nearly 40,000 people in Sweden made this notion less clear. This study found pet owners suffered more mental health problems than their non-pet owning peers. Many argue love for pets is purely social. Harold Herzog, a psychologist at Western Caroline University, believes love for pets is contagious and something caught from our peers. Are humans simply programmed to love soft and helpless things?

A study at the University of California at Berkeley asked participants to identify themselves as either a “dog person,” “cat person,” “both,” or “neither.” Almost 40% identified with both cats and dogs. Thirty-eight percent said they were dog people while 19% said they were cat people. A study of 4,565 volunteers from the University of Texas at Austin found those who identify as “dog people” are more extroverted, more agreeable, more conscientious, and more fun. Dog owners also tend to follow rules more closely. Another study at Wisconsin’s Carroll University found dog owners are not only more extroverted but also have higher energy levels. Since dogs are more social and require walking outside, it stands to reason many dog owners are social as well.

Approximately 35% of households in the United States have at least one cat. The same study from the University of Texas found cat owners identify as more creative, adventurous, and open. It also found cat people are more neurotic. The Carroll University study found cat people are smarter, more introverted, and more sensitive. This same study also found cat owners are more open to bending or breaking rules and identify as non-conformists. Cat lovers also find happiness in numbers as many of them tend to have more than one cat in their home.

Scientific American Mind Magazine compiled available research about what our choice of pet reveals about our personality. They found men who own exotic pets are much less agreeable. Female owners of exotic pets tend to be more open to new experiences. Snake owners describe themselves as more relaxed, unpredictable, and unconventional. Turtle owners identify as hardworking, reliable, upwardly mobile, rational, and goal-oriented. This same compilation of research found that bird owners are more likely to be polite, caring, outgoing, unemployed, and expressive. Female bird owners identify as more socially dominant. Horse owners hold advanced degrees. They are more assertive and introspective and less warm and nurturing. Male horse owners tend to be aggressive and socially dominant, while female horse owners identify as nonaggressive and easy going. Horse owners also are more likely to own their own home in a rural area.

Pet ownership is highest among:  households with 5 or more members; people who work full time; those who are social and empathic; and people who own their own home. According to the American Veterinary Medical Association, the state of Arkansas has the highest percentage of households that have a dog and Vermont the highest with a cat. Non-pet owners are more likely to live in urban areas, keep a tidy home, and describe themselves as independent. They live in the Mid-Atlantic States and hold advanced degrees. However, as Scientific American Mind cautioned, it is important to note surveys of pet owners demonstrate individual differences within the various groups are greater than the differences between them. We all know many outgoing cat lovers, shy dog lovers, and nurturing horse lovers.

There is no question our pets are integral to how we see ourselves and perhaps influence how others see us. Keep in mind several studies have shown dogs really do look like their owner. A Japanese study showed people two sets of photographs. One set included actual owners and their dogs, while another set was random. People were able to correctly match dogs and their owners 80% of the time. 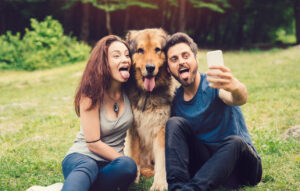